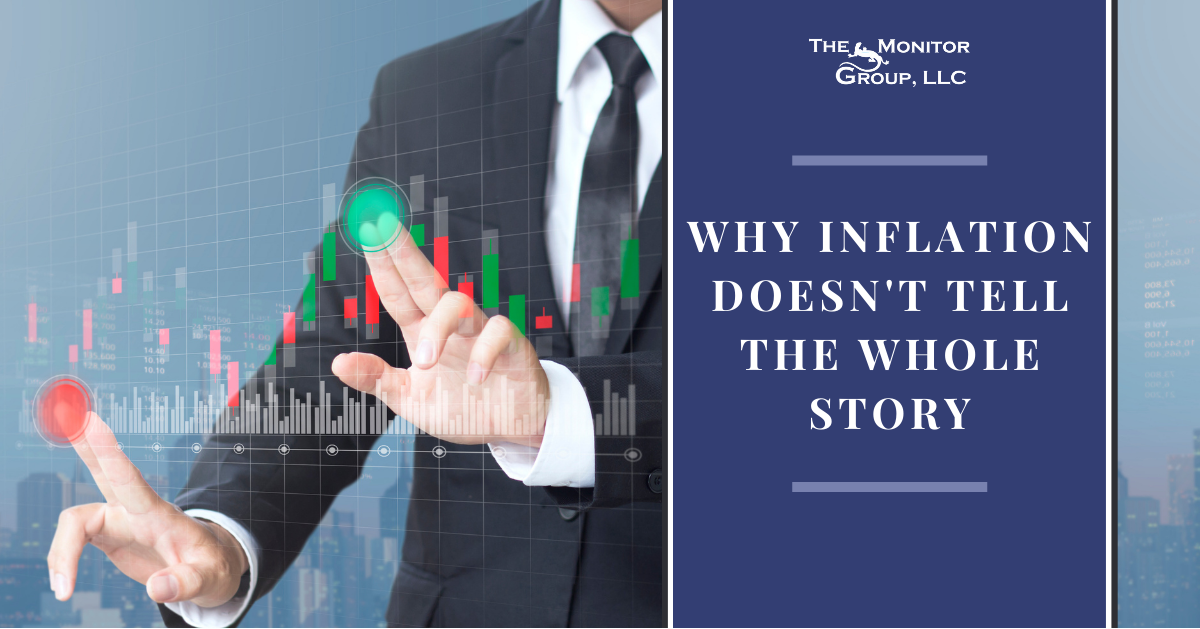 Why the inflation rate doesn’t tell the whole story – all it takes is a spike in a category like used cars to cause consumer prices to soar.

Markets, economists and policymakers have been fretting about inflation for months, worried that the trillions of dollars being spent in recent and future government stimulus programs could overheat the economy and send prices soaring.

On May 12, 2021, the worrywarts seemed to have their fears confirmed when the April consumer price index shot up a seasonally adjusted 0.8%, the biggest jump since 2008. The year-over-year inflation rate of 4.2% is double what the Federal Reserve has set as its target.

Should consumers be concerned?

As a finance expert, I believe the answer to this question lies in a closer look at what actually goes into the main way the U.S. measures inflation.

Inflation is defined as the change in the price of everything from a rib-eye steak and a bar of Ivory soap to an eye exam or tank of gas.

In the U.S., the most commonly used measure of inflation is based on the consumer price index. Simply put, the index is the average price of a basket of goods and services that households typically purchase. It’s often used to determine pay raises or to adjust benefits for retirees. The year-over- year change is what we call the inflation rate.

Since this is an average across a range of categories, the main number masks lots of key details and big month-to- month swings in various goods and services. For example, airline fares jumped a seasonally adjusted 10% in April partly recovering from their pandemic plunge – while shelf- stable fish and seafood declined 3.5%.

Food and energy prices in particular can be very volatile, and, for that reason, policymakers often focus on what is known as “core inflation,” which excludes those numbers.

A moderate amount of inflation is generally considered to be a sign of a healthy economy, because as the economy grows, demand for stuff increases. This increase in demand pushes prices a little higher as suppliers try to create more of the things that consumers and businesses want to buy.

Workers benefit because this economic growth drives an increase in demand for labor, and as a result, wages usually increase – as the latest jobs report suggests is beginning to happen.

Workers with higher wages then can go out and buy more stuff, part of a “virtuous” cycle that keeps the economy humming. Inflation isn’t really causing all this to happen – it is merely the symptom of a healthy, growing economy.

But when inflation is too high – or too low – a “vicious” cycle can take its place. If left unchecked, inflation could spike, which would likely cause the economy to slow down quickly and unemployment to increase. The combination of rising inflation and unemployment is called “stagflation,” and is feared by economists, central bankers and pretty much everyone else.

It’s what can cause an economic boom to suddenly turn to bust, as Americans saw in the late 1970s. The Fed managed to reduce inflation to normal levels only after driving up short-term interest rates to a record 20% in 1979. 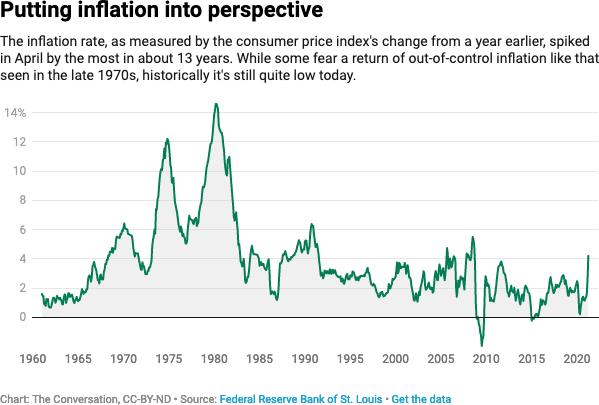 What’s behind the increase in the inflation rate?

So, how can we determine if this is happening now? Let’s take a closer look at what makes up the consumer price index.

Much of the increase in April was driven by used car and truck prices, which jumped 10% during the month, by far the biggest increase of any category that makes up at least 1% of the index. As has been reported, that was largely due to a surge in buying by rental car companies, which sold off much of their inventories early in the pandemic, as well as the global chip shortage that has reduced production of new vehicles. Other price increases, such as for lumber and some electronics, are also tied to short-term supply chain problems.

Increased demand from consumers who have received stimulus checks is another possible cause of price increases, but it’s harder to quantify the effect.

Most categories were much lower. Food prices grew 0.4%, driven by demand for takeout, and energy was down 0.1% – though that was before May’s East Coast pipeline problems.

Because the consumer price index is made up of a range of goods and services, it’s often the case that changes in the index – and therefore inflation – are being driven by just one or two parts of the economy, as opposed to an across-the- board price change. In the case of April prices, transportation-related items like used vehicles and airfares and energy services like electricity were the biggest drivers. And these appear to be transitory increases.

Nothing to fret about – for now

This is why most economists don’t think the U.S. is heading into a new period of high inflation. Instead, there is evidence of pent-up demand, particularly for services that were unavailable during the height of the pandemic in the U.S., which may result in some short-term jumps in prices.

There are signs that inflation will be a bit high for another month or two, but it should return to more normal levels of around 2% per year by the end of 2021. The Fed is banking on this as well.

So, back to our initial question: Is there any reason for alarm?

I don’t think so, nor do most economists or the Fed. Others, especially investors, disagree. We won’t know who is ultimately right for some time.

Meanwhile, consumers can expect to pay a bit more this summer if they’re finally planning to take a vacation after a year stuck at home, buy a used car to travel the country or build a new home. But even at higher prices, these are all signs of the return of a well-functioning economy – and normal life.

This article is an expanded version of a story published on Sept. 17, 2020.

Authors Richard S. Warr Professor of Finance, North Carolina State University. Richard S. Warr does not work for, consult, own shares in or receive funding from any company or organization that would benefit from this article, and has disclosed no relevant affiliations beyond their academic appointment. Republish our articles for free, online or in print, under our Creative Commons license.