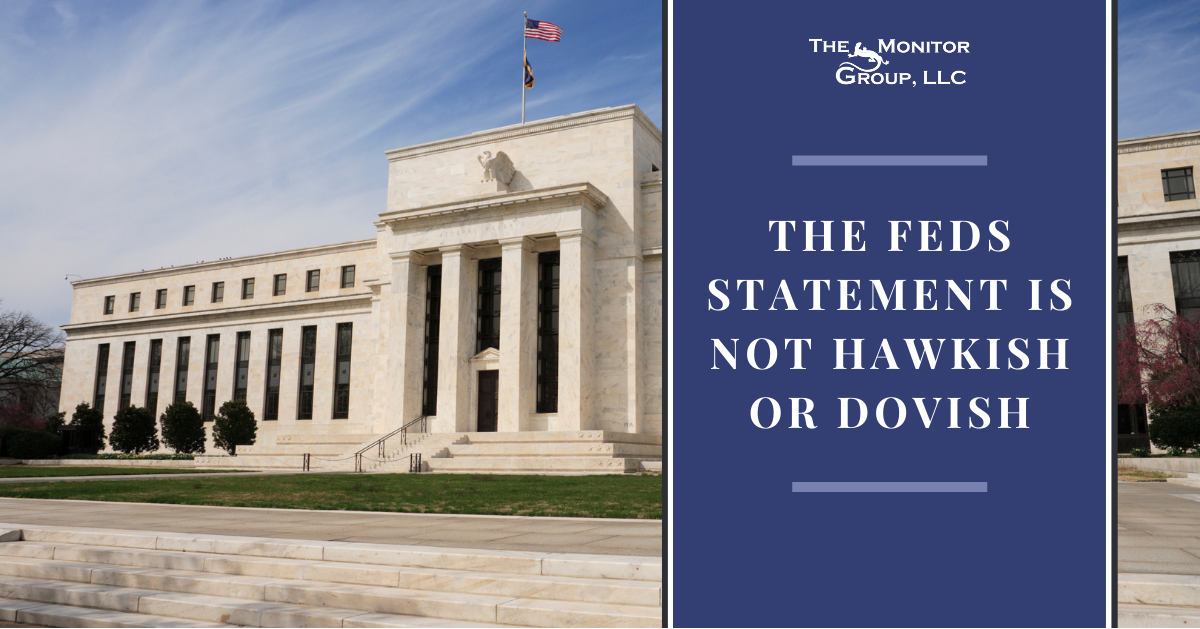 The Fed’s Statement is Not Hawkish or Dovish

And with inflation and a looming debt ceiling fight, uncertainty is rampant

The uncertainty that Washington policy makers foment can be considered a big culprit in our economic stasis. What will happen next with the Federal Reserve’s decision to raise rates, or the proposed $6 trillion infrastructure bill, or the debt ceiling threat that is just around the corner?

When uncertainty exists, businesses tend to not take action. They potentially sit on trillions in cash, as they don’t know whether to hire or fire, expand or contract. Investors, likewise, get stuck with more money in cash than they like, as the direction of the stock and bond markets is murky.

Since the onset of the COVID pandemic, the Fed has bought bonds and other assets in an effort to juice sluggish economic growth, a plan lovingly called quantitative easing, or QE to the cool kids. But by the summer of 2021, market expectations were beginning to think that our central bank would taper down its monthly purchases. But the timing on such a reduction is unclear. The Federal Open Market Committee (FOMC), the central bank’s monetary policy arm, issued a statement after its mid-June meeting and no one really knows what it means.

One recent headline read that the “FOMC Statement is Dovish” and another read “Hawkish FOMC Statement.” Another story read the statement as “less dovish than expected” and another said it was “hawkish on balance.”

Markets are understandably confused. Some on Wall Street expected a strong statement about easing bond purchases because recent inflation numbers and better-than-expected economic growth. Instead, the Fed settled on more of the same.

The Words of the Fed

Here are the excerpts from the FOMC meeting minutes:

“The Federal Reserve is committed to using its full range of tools to support the U.S. economy in this challenging time, thereby promoting its maximum employment and price stability goals.

Progress on vaccinations has reduced the spread of COVID-19 in the United States. Amid this progress and strong policy support, indicators of economic activity and employment have strengthened. The sectors most adversely affected by the pandemic remain weak but have shown improvement. Inflation has risen, largely reflecting transitory factors. Overall financial conditions remain accommodative, in part reflecting policy measures to support the economy and the flow of credit to U.S. households and businesses.

The path of the economy will depend significantly on the course of the virus. Progress on vaccinations will likely continue to reduce the effects of the public health crisis on the economy, but risks to the economic outlook remain.

The Committee seeks to achieve maximum employment and inflation at the rate of 2 percent over the longer run. With inflation having run persistently below this longer-run goal, the Committee will aim to achieve inflation moderately above 2 percent for some time so that inflation averages 2 percent over time and longer‐term inflation expectations remain well anchored at 2 percent. The Committee expects to maintain an accommodative stance of monetary policy until these outcomes are achieved. The Committee decided to keep the target range for the federal funds rate at 0 to 1/4 percent and expects it will be appropriate to maintain this target range until labor market conditions have reached levels consistent with the Committee’s assessments of maximum employment and inflation has risen to 2 percent and is on track to moderately exceed 2 percent for some time. In addition, the Federal Reserve will continue to increase its holdings of Treasury securities by at least $80 billion per month and of agency mortgage‐backed securities by at least $40 billion per month until substantial further progress has been made toward the Committee’s maximum employment and price stability goals. These asset purchases help foster smooth market functioning and accommodative financial conditions, thereby supporting the flow of credit to households and businesses.

In assessing the appropriate stance of monetary policy, the Committee will continue to monitor the implications of incoming information for the economic outlook. The Committee would be prepared to adjust the stance of monetary policy as appropriate if risks emerge that could impede the attainment of the Committee’s goals. The Committee’s assessments will take into account a wide range of information, including readings on public health, labor market conditions, inflation pressures and inflation expectations, and financial and international developments.”

What Does That Really Mean?

The reaction to the Fed’s back-and-forth statements is in keeping with the ongoing theme of “uncertainty,” which could very well be the theme for not only the Federal Reserve Board, but for Congress too. And of course, it could be a theme for the U.S. economy and investing, as well.

That wasn’t so bad in the pre-QE days, when stock and bond prices generally moved in opposite directions. At least then, having an allocation of both could mitigate risk, because gains in one market often balanced out losses in the other.

Washington could be called the nation’s epicenter of uncertainty. And this summer may bring worry about the rerun of gridlock on Capitol Hill, and the renewed prospect of federal default if the debt ceiling does not get raised (set to expire on August 1st). Don’t be surprised if the only agreement lawmakers reach on the debt ceiling is to delay making an agreement.

The net effect of all this uncertainty could be a paralysis of sorts. Potentially, we all wait for inflation to subside, for the unemployment rate to go down, and for the economy to grow at a normal rate. We may find encouragement in a little movement here or there, but good news is always balanced with bad news. Put it together and you have a flat line.

The opinions voiced in this material are for general information only and are not intended to provide specific advice or recommendations for any individual.

All information is believed to be from reliable sources; however LPL Financial makes no representation as to its completeness or accuracy.

Inflation is the rate at which the general level of prices for goods and services is rising, and, subsequently, purchasing power is falling.

This article was prepared by FMeX.